It’s gonna be as messy as an actual 6 year old’s birthday party. Last year we had Kagoule and Abattoir Blues – knowing it was going to be busy a barrier was put in place but we wont be making that mistake again as it ended up being crowdsurfed over peoples heads during Abattoir Blues set. 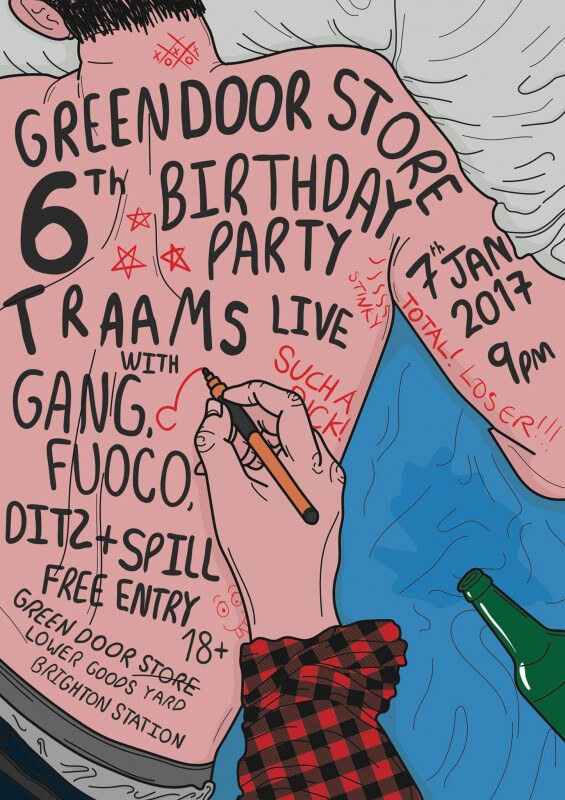 It’s tradition that our birthday line up’s are ‘Brightoncentric’ and its also becoming a tradition that the bands that play go on to do great things. TRAAMS already need no introduction, they have an 8 minute krautrock banger that I can’t get out of my head.

GANG have a live show that makes me feel wierd. That kind of feeling doesnt happen as often as I’d like it to. They will be playing SXSW in Austin, Texas which is a REALLY BIG DEAL! Buddies FUOCO dont hide behind anything. It’s true, open, real expression. New single is HERE on line of best fit it sounds like they have recorded the edge of destruction.

A brand new radio station focusing on new, exciting music will also be launched on the night, named PLATFORM B. This will be hosted by influencers from all sorts of genre’s, ranging from Happy Hardcore to Hardcore Punk – Theres something for everyone.

Kicking the night off is DITZ, a brand new noise band and SPILL whom I love to bits (See our post about them here)